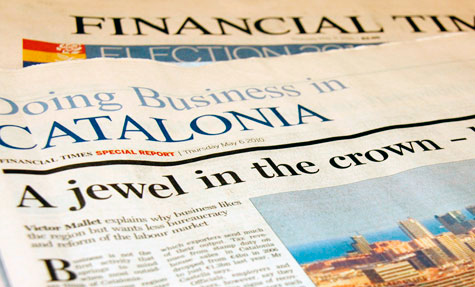 David Gardner: Spain-style devolution can be part of a crisis solution

Ever since it became clear the eurozone crisis was not just about Greece, the most loudly voiced refrain – aside from serial European summit communiqués purporting to have resolved said crisis – has been from “peripheral” countries in the line of fire saying: “we are not Greece”.

Ireland was not Greece. Then Portugal was not Greece. And, indeed, they were not. But they still ended up under the “troika” – the European Commission, European Central Bank and International Monetary Fund – which in exchange for multibillion-euro rescue packages has placed their economies under strict austerity and reform programmes.

Now, as the rebellion of Greek voters pushes Greece stumbling towards the euro exit, it is Spain’s turn to proclaim “we are not Greece”. And, indeed, for the most part, it is not.

True, yields on its 10-year bonds have rocketed into the twilight zone beyond which Greece, Ireland and Portugal became wards of the troika. In terms of the collapse in demand and economic output, moreover, and the horrendous scale of unemployment – touching one in four of the workforce – Spain is beginning to look alarmingly like Greece.

The causes of Greece’s problems really were different: breathtaking fiscal profligacy, much of it concealed; a dysfunctional tax system that encourages evasion; clientelism in the public sector alongside protection for “closed” professions in the private sector.

Spain is more like Ireland. Both had low sovereign debt and balanced budgets before the crisis. Both used the cheap and easy credit that followed the introduction of the euro to go on real estate binges that compromised their banks. Ireland has heavily recapitalised its shrunken banking system and ringfenced toxic property assets in a “bad” bank. Until now Spain had been slow to address the problem of its cajas, the regional savings banks most exposed by its real estate bust.

Yet to listen to some European officials, Spain’s most critical problem is overspending by regional administrations. Olli Rehn, economic and monetary affairs commissioner has, for example, told Spain to get “a very firm grip to curb the excessive spending of regional governments”. The centre-right government of Mariano Rajoy has threatened to take control of regional budgets that exceed a deficit target for this year of 1.5 per cent of gross domestic product.

Focusing on the regions in this way could, however, create a real political problem by unravelling the post-Franco settlement that created one of the most devolved states in Europe. This quasi-federal Spain, under the umbrella of the European Union, has been a conspicuous success over the past 25 years, seeing not only a big jump in national prosperity but wealth spread throughout the whole country for the first time in Spanish history.

There is, of course, replication of functions and waste, political jobbery and peculation in some regional governments. In good part that is because the Spanish right could only countenance meeting longstanding national demands from Basques and Catalans within a framework that gave autonomy to all Spanish regions, whether they wanted it or not. Those who really did want it now fear a rollback.

But Spain’s problems need proper diagnosis, and devolution at its best should be seen as part of the solution. To begin with, the regions have to spend a lot because the main powers devolved to them, health and education, cost a lot, and the money transferred from the centre to finance this does not keep up. Shutting down regional autonomy will not much change that.

The Basque Country, by contrast, raises all its own taxes and transfers an agreed amount to the centre – as Catalonia wants to do. The Basque government manages to maintain the highest level of pre-school education in the country, double the national average, and to spend almost double the average amount on all pupils. At Thursday’s fiscal summit of central and regional governments, it will probably set its budget deficit target a couple of decimal points below the 1.5 per cent cap fixed by Madrid and Brussels. Devolution as such is not the problem; making it work well can be part of the solution.