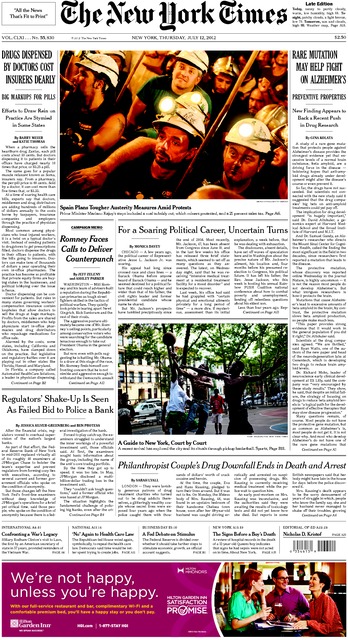 Only a month after being lionized for staring down European officials and avoiding budgetary dictates from Brussels, Prime Minister Mariano Rajoy unveiled another package of unpopular austerity measures on Wednesday as the country’s miners staged a raucous and occasionally violent protest.

Madrid, the euro zone’s fourth-largest economy, is facing interest rates for its bonds that are unsustainable in the long run, forcing Mr. Rajoy to take many of the measures pressed on Europe’s insolvent countries —Greece, Portugal and Ireland— by international lenders.

“The circumstances have changed,” Mr. Rajoy said in offering the new plan, “and I have to adapt.”

His trump card throughout the crisis has been fear: deep concerns about the consequences of a full-scale bailout of Spain that could potentially throw the euro zone into an immediate crisis and a potential death spiral. So on Tuesday, European allies agreed to lend Mr. Rajoy billions to recapitalize Spanish banks and to give him until 2014 to meet deficit targets of 3 percent of gross domestic product.

As Spain’s problems have mounted, officials have chipped away at Mr. Rajoy’s independence, and this time there was apparently a quid pro quo, in the form of the new package of tax increases and spending cuts, including a three-point rise in the national sales tax, to 21 percent from 18 percent, breaking a previous pledge by Mr. Rajoy. The round of measures, the fourth from Mr. Rajoy in seven months, is devised to reduce Spain’s budget deficit by $80 billion over the next two and a half years.

The additional budget measures could make it even harder to revive the country’s economy. But Mr. Rajoy finds himself in an increasingly tight bind between angry Spanish voters and anxious European officials, and this leaves him with few options.

Spain has been buffeted by the economic crisis and the collapse of a housing bubble, which have badly weakened its banks, thrown it into recession, increased unemployment to 25 percent and ballooned what had been a respectable debt load. Investors responded positively to Wednesday’s news by reducing the yield, or interest rate, on Spain’s benchmark 10-year bonds to 6.6 percent, from 6.8 percent on Tuesday.

The yield breached 7 percent on Monday, before finance ministers agreed to loosen Spain’s budgetary targets, as well as make $37 billion of the $125 billion in bank rescue money available by the end of this month.

While Spain’s markets quieted, Italy’s dropped on persistent worries that Rome might also be forced to seek help from a permanent euro zone rescue fund that, at around $600 billion, is widely considered inadequate to the task.

There was also concern that more austerity in Spain could deepen its recession. In a note titled “Spain Killer,” Dario Perkins, an analyst at Lombard Street Research in London, expressed dismay that Mr. Rajoy had opted for more budget squeezing. He has “taken full responsibility for these measures,” Mr. Perkins wrote, “yet it seems probable they were forced on him as part” of the European Union bailout.

The aid to Spain’s banks will also bring with it greater supervision of the country’s finances and banks by Brussels and the European Central Bank. By the end of the year, however, if a central European banking supervisory agency is set up, the aid can be transferred off the books of Spain’s government onto a European bailout fund, according to decisions made at a recent European Union summit meeting.

The late-night meeting also resulted in an agreement that the European bailout funds could more liberally buy Spanish and Italian bonds, in an effort to keep interest rates down. But the fear is that the bailout funds are too small for Spain and Italy if they run into even greater trouble, and that speculators are bound to test the funds’ limits, driving up rates until they are convinced that the European Union and the euro zone will back Spain and Italy no matter what.

Still, Germany and some of its northern allies have refused to allow any European bailout fund to act like a bank or to buy Spanish and Italian debt directly. Berlin says such moves would violate its Constitution and its ban on bailing out other governments, while writing a kind of blank check without parliamentary oversight.

The new package underlines the extent to which Mr. Rajoy’s star has fallen since last month, when he won a bank recapitalization plan from Europe, rather than a bailout with the attendant demands from Brussels.

Francisco Longo, professor of public governance and public policy at the Esade business school in Barcelona, said, “Rajoy has now changed the terms of the contract that he had with his electorate.” To maintain social cohesion in Spain, he added, Mr. Rajoy faced an uphill struggle “to convince people that, however much these measures contradict what he previously said, they are truly unavoidable and will ultimately have positive consequences.”

On Wednesday Mr. Rajoy also faced the anger of Spanish miners, who arrived in Madrid after a long march from other regions to protest sharp cuts in coal subsidies. Young men threw rocks and firecrackers at riot police officers who used their truncheons and fired rubber bullets.

Mr. Rajoy and his conservative Popular Party came into office in December, after voters punished the previous administration, under José Luis Rodríguez Zapatero, a Socialist, for its economic mismanagement.

Armed with the parliamentary majority that Mr. Zapatero did not have, Mr. Rajoy set out to overhaul the economy, starting with Spain’s rigid labor market rules. But Mr. Rajoy’s reform agenda was put on the back burner because of the far more urgent banking and financing problems confronting Spain, especially after the demise in early May of Bankia, a giant mortgage lender.

Governments have been moving to stay out of the line of fire of the markets and to meet European targets. In Italy, Prime Minister Mario Monti has announced significant spending cuts and tax increases, but is facing increasing domestic political resistance.

In France, a recent report from the independent French agency that audits the budget said President François Hollande and his government must find $7.25 billion to $12.5 billion in additional revenue or spending cuts by year’s end to meet a target deficit of 4.5 percent of gross domestic product.

Meanwhile, Mr. Rajoy’s announcement that civil servants would lose their traditional Christmas bonus payment, saving about $5 billion, was met with a strike threat by the main union for civil servants.

As in many other European countries, civil servants enjoy ironclad job guarantees in Spain. Mr. Rajoy, however, dented their status in December, raising their working week to 37.5 hours from 35. On Wednesday, he announced an overhaul of local public administration intended to yield $4.25 billion in savings, notably curbing the salaries of town mayors and scrapping several local state-owned entities. Central government ministries, meanwhile, will have to make an additional $725 million in cuts this year.